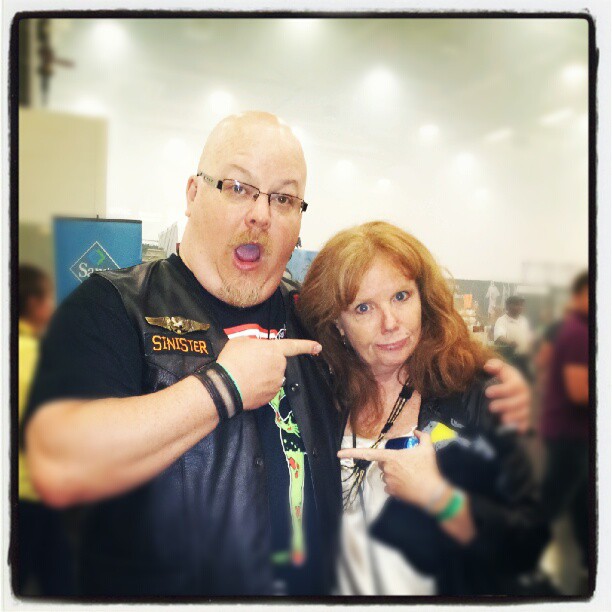 I’ve been a fan of Lesley Bannatyne‘s work for a number of years now (she writes about Halloween, historically, socially and culturally) and had the opportunity to not only meet her at HAuNTcon earlier this year, but whisk her away for a night of fun and frolic with The Zombie Army. We’ve kept in touch since and she asked me a couple of questions for a new book she’s writing. I’m posting my responses below for posterity, as I very much doubt most of this will actually be quoted in the book, if any of it is at all.

More than any other holiday, I think Halloween is personal; each person celebrating it is, in many ways, doing so differently than everybody else, based on their own history with the holiday, its imagery, its icons and archetypes, etc. I think it means something specific to each and every person who celebrates it.

Now granted, for an overwhelming majority of Americans, it’s little more than an excuse to put on a costume and have a party, and that’s fine – most people only get to play dress-up once a year (which is a shame). For many, it’s also about one-upmanship; who can have the most lavish or outrageous costume, who can throw the biggest party. They spend hundreds of thousands of dollars to transform the Playboy Mansion, Universal Studios Theme Park, Knott’s Berry Farm, Six Flaggs, etc. Similar to Mardi Gras, for a lot of people it’s simply an opportunity to slip out of the daily grind and go a little wild.

Halloween is the one time of year where it’s acceptable for us as a society to publicly express ourselves in a dark and spooky way. We get to playfully (and not-so-playfully) deal with things that scare us, out in the open and with our friends and family. It’s cultural catharsis. Death, monsters, the dark, the forbidden, the unknown – they all come out to play for Halloween, and we can safely dance with them, have a drink or three and then put them away on November first.

For a growing number of people, however, Halloween is something more. Many of my generation were lucky enough to be kids at the right time in America when Halloween was the way it’s still depicted in the movies and in fiction, before it became so horror-oriented and paranoid. Back when it was about Trick or Treats, ghosts, goblins and witches, It’s The Great Pumpkin Charlie Brown and so forth. I was doubly lucky to have parents who actively encouraged us to have fun and helped us celebrate Halloween; some of my fondest childhood memories are of Halloween nights in my youth.

For us, Halloween was (is) magic. Dark, spooky magic. The decorations, the dark, the sense of adventure a kid gets Trick or Treating, the sense of community created when everybody in a neighborhood gets into it, decorates, and comes out to give candy to the tots; these things weave magic. It’s palpable; you can feel it in the crisp Autumn air and feel it in your chest. I think it’s the spooky part that really sets it all apart from other holidays, the thrill, the low-level fun edgey feeling that maybe, just maybe, there really is something with fangs and claws out there in the dark, hungry and waiting. You just don’t get that rush at Christmas!

As a result, us Halloween kids have grown up loving the holiday, and now we’re making it our own. We’re reclaiming it from the corporations and companies that somehow turned it into a blood-and-guts holiday in the ’80’s and ’90’s, and bringing it back around to the fun side in an attempt to give our kids the experiences we had, and instill in them the same sense of spooky magic and dark wonder that we enjoyed. We’re celebrating our collective youth when we celebrate Halloween. We’re celebrating our children, and giving them something to remember fondly when they’re older. In some ways we’re celebrating one of the last vestiges of magic and mystery in the world, however you choose to define those words.

And if you’re like me, you’re outwardly celebrating how you live all year. 😉

Since you started designing/marketing/networking, have you seen any sorts of changes – e.g., a huge jump in people using social networks to talk about Halloween, or a greater (or lesser) number of companies using different communications tools to get the word out?

I first discovered Halloween on the internet (so to speak) via AOL in 1994, when they’d do a whole section of downloads, games and articles for the holiday. I was in heaven and for a couple of years they did a really great job with it, but then they handed that aspect over to an external site and it just wasn’t the same. Over the years there were a few websites that popped up, but they were mostly repository sites – history, recipes, etc. There was no community or interaction to speak of (that I knew of).

Then in the late ’90’s I discovered a couple of email discussion groups. Once again, I was in Heaven – people were actively talking about Halloween and haunted houses all year! Shortly after this discovery Sinister Visions became my full-time job and, since then, Halloween’s 24/7/365 presence on the web has grown exponentially: Websites, message boards, discussion lists, community sites, podcasts, video channels, you name it.

Perhaps because of the age demographic, the Halloween and haunted house industry was a little slow on the uptake with social media, but they’re starting to get it. The savvy companies have been there from the start, but (literally) every day we see haunted houses, prop companies, special effects services, Halloween vendors and enthusiasts, musicians, artists, designers and more surfacing on Twitter, Facebook, MySpace, YouTube, Flickr and other services. It has literally never been easier to find other Halloween enthusiasts than it has been right now, as you read this, and if you read it again tomorrow, it’ll be true then, too!